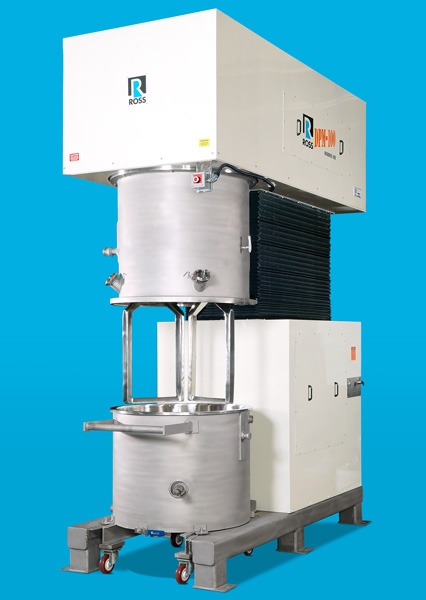 Ross Double Planetary Mixers, like this 25 gallon production unit, have been the mixers of choice for producing high quality, void-free Syntactic Foams.

Thermoforming is the process of forming thermoplasticsheet by the use of heat and pressure (or vacuum).Plastics such as polystyrene, polyethylene, ABS andpolycarbonate are commonly formed by this method.

One method of Thermoforming utilizes a male plugto assist the vacuum or pressure in forming the plasticpart. These plugs have traditionally been machined fromblocks of aluminum which can be expensive. In addition,the aluminum plugs usually need to be temperaturecontrolled - plugs that are too hot can result in plasticsticking to the plug; plugs that are too cold can promoteâ€œfreezingâ€ or premature hardening of the plastic resultingin an improperly formed plastic part.

Syntactic Foam plugs have been used very successfullyas a substitute for aluminum plugs. Syntactic foamsare microsphere filled resins such as epoxies or polyurethanes.They are characterized as having low densitiesand high compressive strengths, but more importantlyfor Thermoforming applications, they are thermallyinsulating materials, neither chilling or heating the plasticbeing formed. The end result is a material that iseasily machined to any shape -and ultimately, a lesscostly Thermoforming plug.

Syntactic Foams require careful mixing techniquesto insure their low density, high strength characteristics.In addition, the shapes that are cast must be completelyvoid free. Any pores or voids in the finishedplug would transfer that defect to the molded plasticpart.

The Ross Vacuum Double Planetary Mixer is employedby companies worldwide for Syntactic Foamproduction. The gentle, yet thorough mixing action insurescomplete mixing of the hollow microspheres andresins while minimizing the number of fracturedmicrospheres.

The product is usually cast directly from the mix caninto molds. These molds can form either net shapeparts, or blocks from which finished parts are machined. 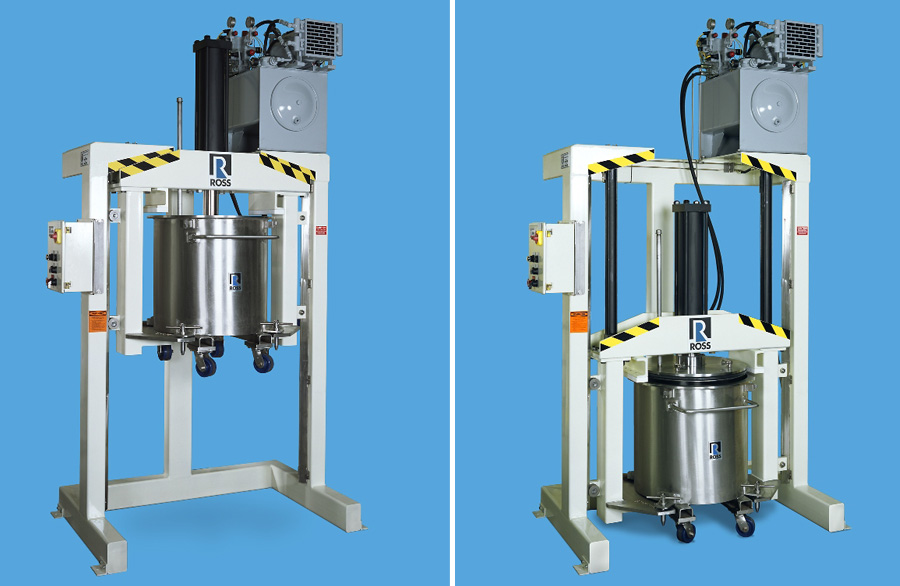 Ross Follower Plate Discharge Systems, like this elevatedconfiguration, can be used to discharge viscous Syntacticsfrom the mix can of a Double Planetary Mixer.

Some of the recommended features for Double Planetary Mixers used for Syntactic Foams include:

Important Note: Blade-to-bowl and blade-to-blade clearances on Double Planetary Mixers, for Syntactic Foam applications, should be liberal (1/8" for lab mixers and 1/4" - 3/8" for production units) to prevent excessive breakage of microspheres.