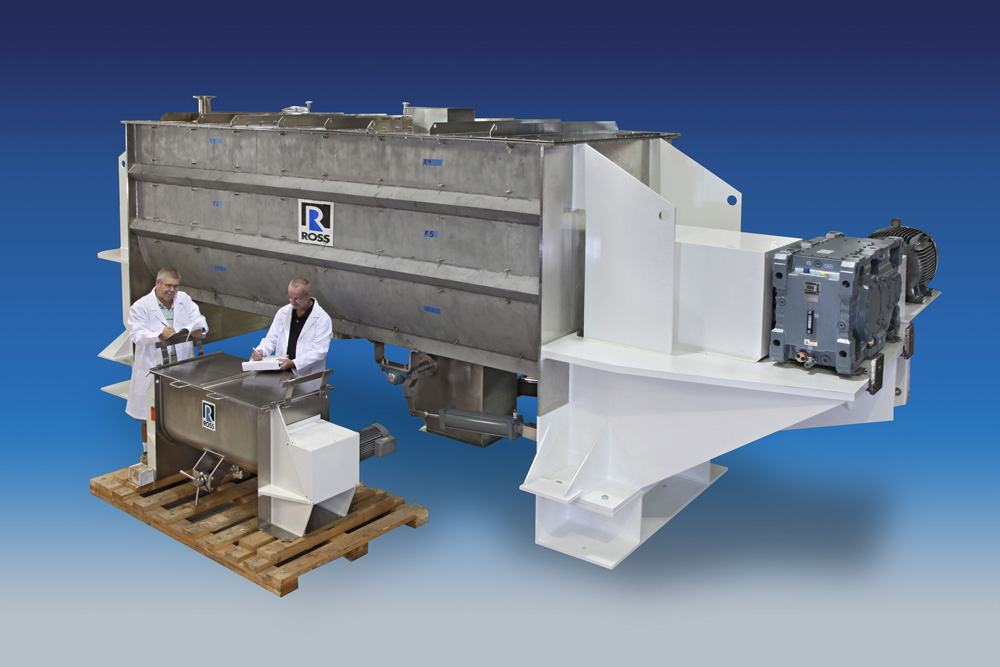 The simplicity, functionality, and affordability of Ribbon Blenders contribute to its widespread use within the world of baking and snack foods. It is commonly used for dry blends such as bread mixes, spices and seasonings, as well as for wet applications such as extruded cereals and cake batter. Ribbon Blenders consist of a U-shaped horizontal trough and an agitator made up of inner and outer helical ribbons that are pitched to move material axially and radially. This combination promotes fast and thorough blending even if the batch contains components with different shapes, sizes and densities.

A manufacturer of popular snack foods was looking for a new way to produce various cream icings and fillings. They were making these in a dough mixer with batches taking about 30 minutes. This company came to test their products on our Ribbon Blender to see if we could supply them with a more affordable piece of equipment capable of producing the icings efficiently. The products consist of shortening, powdered sugar, and a flavor solution. The desired consistency is a soft creamy type icing with a specific gravity between .95 and 1.0.

For the first test, we charged 64 lbs. of an icing base, which was a fairly viscous blend of shortening and other ingredients. We then added approximately 20 lbs. of whey powder and flour and started the 5-cu.ft. Ribbon Blender at 20 rpm. We gradually increased the speed to 60 rpm and then stopped mixing at the 3-minute mark. The sidewalls were scraped down before we resumed mixing at 70 rpm. Mixing was stopped again at the 7-minute mark for another scrape down and at this point the batch began to have a nice creamy texture. When we reached the 15-minute mark we stopped mixing to add in a 1/2 gallon of a butterscotch paste. At the 20-minute mark, we added in marshmallow meringue in four stages. We took samples after 25 minutes of total mixing and determined that the vanilla cream filling was exactly as desired.

After the first successful batch, we conducted two more tests with a butterscotch icing and a chocolate icing. For both recipes, the soft creamy consistency was achieved in less than 20 minutes of mixing on the Ribbon Blender. The client was very pleased with the results of all three tests and went on to purchase two Ross Ribbon Blenders for icing production. Two more units were later purchased and installed in the powder blending section of their operation. Provisions for convenient addition of minor liquid ingredients were included in these Ribbon Blenders.