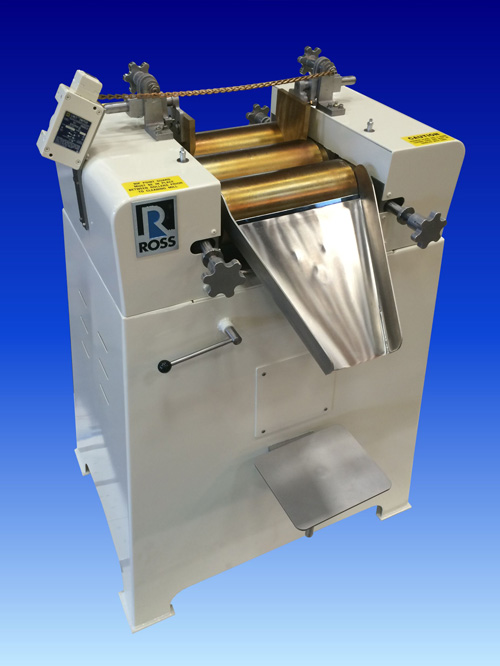 Three Roll Mills were developed over 150 years ago, yet they continue to be one of the best methods of for preparing very fine particle dispersions. This equipment is used in a wide variety of applications including paints, inks, cosmetics, ointments, gels, pastes, and other viscous materials.

A major manufacturer of dental composites came to our Test and Development Center to improve their process for pigment dispersions. This company was using a Ross Double Planetary Mixer to mix a very heavy paste with a base and a catalyst which uses a red pigment in order to differentiate it. Their mixer was performing well to mix the product, but the company wanted to generate a finer dispersion of the pigments. We suggested conducting a test to see if adding a Three Roll Mill to the process could create the dispersion quality that they were looking for.

The test was conducted using two different samples; one being more viscous, but soft and the other being a paste-like consistency. The first sample had coarse particles which is where they experienced the most difficulty grinding down during their current mixing cycle. We took 1 lb. of material and fed it through a 4" x 8" Three Roll Mill two times; the first pass at a larger gap setting and the second pass at a much tighter gap setting. The milled material was then placed on a Hegman gauge and revealed particle sizes down to 5 microns. This was a major improvement on their process in which the company saw particle sizes in the 70 to 80 micron range. The estimated rate for the two passes through the mill is approximately 1 lb. per hour.

Then we ran a test on the second material sample through the Three Roll Mill in only one pass. After that pass we could see a much more uniform dispersion and the Hegman gauge revealed particle sizes between 10 to 15 microns. It takes approximately 15 minutes for a single pass and the material looks shinier, smoother, and more suitable for blending into the dental impression gel final product. The results of the test showed the company that it would be beneficial for their process to utilize a Three Roll Mill for dispersing pigments. This helped them to create a much finer dispersion while also decreasing the overall mixing cycle time.