Traditionally, formulators have used various water-soluble polymers to increase product viscosity and suspend particles. However, this method has proven to be problematic in high surfactant systems where compatibility is very limited for most polymers.

Rather than relying on simply thickening the surfactant formulation, CELLULON PX and AxCel CG-PX microfibrous cellulose technology forms an insoluble, microscopic three-dimensional network in the liquid. The advantages to this suspension mechanism include its independence from surfactant level and level of micellar structure; its ability to suspend without negatively impacting pour viscosity; and its biodegradability.

This 3-D network formed by CELLULON PX or AxCel CG-PX microfibrous cellulose structures the fluid, producing a measurable yield stress (minimum force per unit area that must be applied to make the structured fluid flow). A particle is suspended in place in this network as long as it doesn`t exceed the yield stress of the fluid. By adjusting the concentration of CELLULON PX or AxCel CG-PX microfibrous cellulose, the necessary yield stress is produced to suspend particles of different sizes and densities.

Upon hydration of the co-agents, microfibrous cellulose is released, but remains highly associated -- almost like pellets of cellulose rather than the desired "web" or "net" of cellulose fibers. Breaking these pellets apart, i.e. the activation step, thus requires high shear mixing.

It is recommended by CP Kelco that one prepare a CELLULONPX or AxCel CG-PX microfibrous cellulose concentrate (up to 1 wt% solution) in fresh water. This concentrated material can then be added to the surfactant formulation at the desired dose using low shear, simple blending equipment.

Kitchen blenders have shown great efficacy in CP Kelco`s labs for making 1% CELLULON PX and AxCel CG-PX microfibrous cellulose concentrates at bench scale.The activated concentrates prepared this way (see lab notes on right) are incorporated into a desired formulation and the measurements of yield stress and rheology serve as the benchmark for comparison with other forms of processing used to activate CELLULON PX or AxCel CG-PX microfibrous cellulose. This method is useful when scaling up to high shear activation methods for pilot plant and full-production scale.

Microscopy techniques are also useful for assessing activation. As the microfibrous cellulose becomes fully activated, it loses its discrete, particle-like structure. By observing a deaerated sample through a simple microscope (12-20x magnification is adequate), one can monitor the level of dispersion. As activation nears completion, there should be few or no particles present.

Each solution tested was pre-mixed using a laboratory mixer with a disperser (saw-tooth) head for approximately 2 minutes, including the time for powder addition. 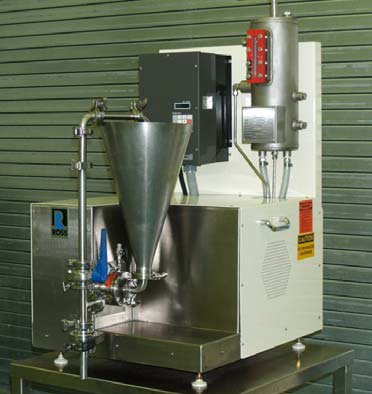 Based upon the microscope work and the empirical sample preparation data employed in these tests by CP Kelco technicians, the following are the general conclusions:

The HSM-400DL model was used in this study to evaluate the performance of a conventional high shear mixer equipped with the typical four-blade rotor and stator assembly.

The results of the mixing trials illustrate that the Ross Ultra-High Shear Mixer outperforms a regular high shear mixer in terms of activation capability. In particular, the QuadSlot and MegaShear mixers offer users of CELLULON PX or AxCel CG-PX microfibrous cellulose the advantage of superior throughput rates. 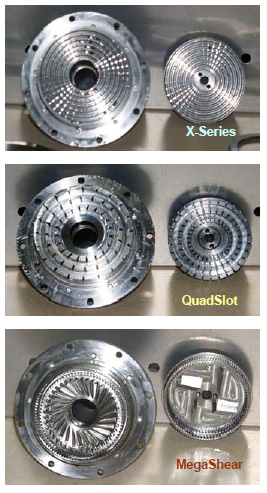 The X-Series head (detailed in US Patent No. 5,632,596) consists of many concentric rows of intermeshing teeth. The mix material begins at the center of the generator and moves outward through radial channels cut in the rotor/stator teeth. Tolerances are extremely close, and the shear applied to the material in each pass is intense. The shear applied by the X-Series head is further intensified since this generator operates at very high tip speeds of up to 18,000 fpm (standard models run up to 11,300 fpm). The gap setting is adjustable from 0.010â€ to 0.060â€ by a set of shims for fine-tuning shear levels and residence times.

The QuadSlot mixing head is a four-stage rotor/stator with a fixed clearance. It is used for applications where very high shear levels are required, but precise control of the shear is not important. The QuadSlot generator produces higher pumping rates than the X-Series head and also requires higher horsepower to run a similar diameter X-Series rotor.

In comparison, the MegaShear head (detailed in US Patent No. 6,241,472) operates at the same tip speed as the X-Series and QuadSlot heads, but is even more aggressive and shear-intensive. The generator assembly consists of parallel semi-cylindrical grooves in the rotor and stator towards which product is motivated by high velocity pumping vanes. Different streams are induced within the grooves, and the resulting flow pattern causes these streams to collide several times.