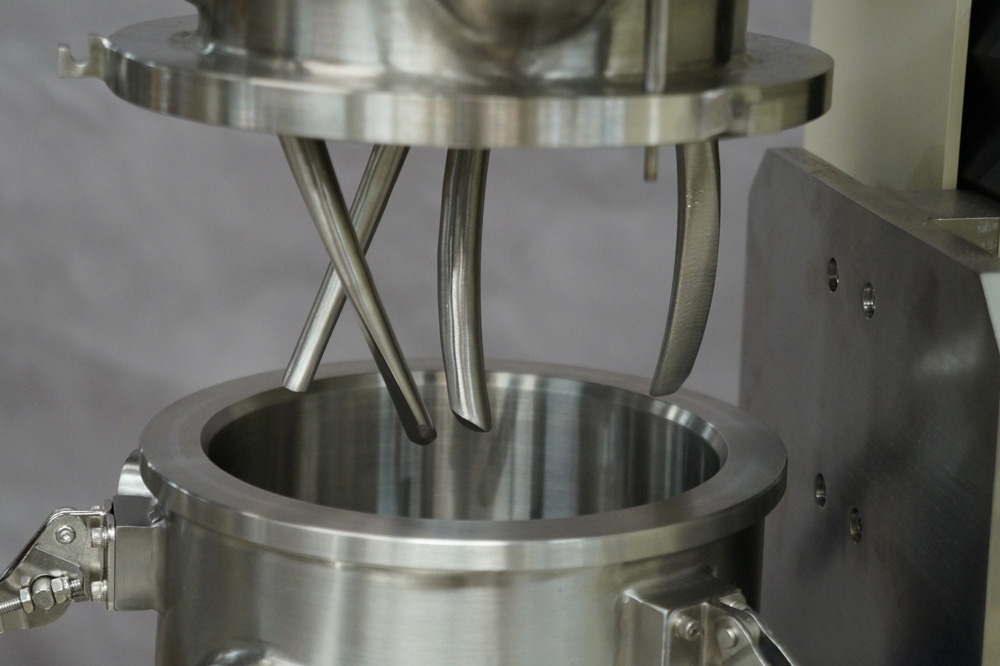 The customer visited the Ross Test & Development Center to make the placebo mixture in a 2 Gallon Double Planetary Mixer with High Viscosity (HV) Blades. Several trials were made with variations in such parameters as manner of addition, process time and vacuum mixing.

After all the ingredients were in, power draw readings remained steady at 23 to 26 percent load, showing that the mixer was not too burdened with the material even while it was in its dough-like stage. At this point, the material was observed to be wiping itself across the vessel wall during mixing. No significant â€˜climbingâ€™ occurred which is one of the advantages of the HV blades over the conventional rectangular blades. And owing to the absence of cross-bars in the agitator design, the HV blades are easily able to pierce through the thick paste when the cover is lowered into the mix can.

In one batch, the entire amount of granular sugar was added all at once on top of the mixed shortening and honey. Though this manner of addition did not appear to affect the level of dispersion, it could significantly lower the quality of production-size batches. The recommended procedure is to add the powders into the can through a charging port while the blades are continuously running.

The product exhibited thixotropic behavior as it lost thickness over time at constant blade speed. At the end of the 7-minute mix cycle, the batches were analyzed for viscosity. The HBT Model Brookfield Viscometer measured 800,000 cps at 5 rpm and 1.48 million cps at 2.5 rpm for the vacuum-mixed batch. The batch mixed under atmospheric pressure had a viscosity of 270,000 cps and 500,000 cps at 5 rpm and 2.5 rpm respectively. Batch temperature was 20Â°C.

Vacuum mixing is readily an option for low-viscosity applications that tend to foam. But manufacturers of thicker products should also explore the benefits of vacuum mixing. In paints and inks, pigment powders or crystals could form loose clusters containing entrapped air. Adhesives and composites processed under vacuum possess better tensile properties as a result of improved shearing and contact of the different components. In food applications, keeping entrapped air (or oxygen) to the minimum ensures longer lasting flavors. Syrups, pastes and dough-like materials will contain unwanted voids after agitation. Pulling vacuum while mixing thus eliminates costly downstream de-aeration steps and decreases processing time.

The customer was pleased with the results of the trials. No undispersed sugars were found on the walls and on top of the blades. The dye colored all batches very uniformly. Combining the capabilities of the HV Blades and the benefits of vacuum mixing, the Ross Double Planetary Mixer proved to be a very suitable machine for making their pesticide paste product.