Multi-step mixing operations involving two or more pieces of equipment can be labor-intensive and time-consuming. With the use of a versatile mixing system, some of these applications can be batched and completed in a single vessel. This one-pot processing approach can significantly reduce cycle times, simplify clean-up and maintenance, enhance batch-to-batch consistency and improve overall production efficiency.

The term one-pot processing is often used to describe pharmaceutical production in a single machine. This includes any technology that combines different unit operations into one piece of equipment. In its typical usage, one-pot processing refers to granulation equipment in which dry blending of powders, liquid addition, wet granulation, drying and sizing of granules are all performed in a single machine.

Benefits of one-pot processing include: 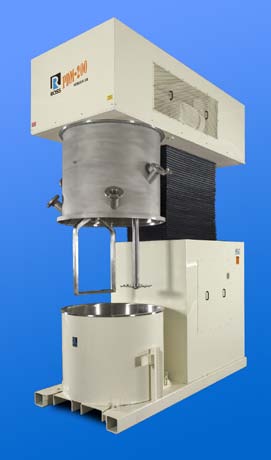 The concept and benefits of one-pot processing can also apply to mixing processes in general, especially those that involve varying phases, viscosities or characteristics at different stages of mixing. A number of modern mixing systems feature such versatility and robustness for batching complex formulations in a single vessel.

For example, a hybrid planetary mixer equipped with both low and high speed agitators can accomplish mixing tasks normally done by two or more devices. In this configuration, a stirrer blade rotates on its own axis while orbiting the mix vessel, a thorough mixing action suitable for processing high viscosity mixtures. At the same time, a saw-tooth disperser blade also revolves around the batch while turning on its own axis at tip speeds of around 5,000 ft/min. This high speed blade quickly disperses powders, fibers, pellets and other solids regardless of product rheology. Each agitator is controlled independently allowing the operator to fine-tune flow patterns and shear rates at any point during the mixing cycle. For demanding applications, dual stirrer blades and dual dispersers are utilized.

Hybrid planetary mixers can effectively replace the multi-step mixing approach of some applications which are batched in a double planetary mixer or kneader extruder, let down with additional solvent, and processed further in a high speed mixer to achieve the desired level of dispersion. Hybrid planetary mixer can also be used for dry blending of powders, coating solid particles with a liquid component and drying pastes or granulations under vacuum to obtain a target moisture content.

A major manufacturer of adhesives and grouts for marine and industrial applications produces a wide variety of highly-filled epoxy-based products with viscosities as high as three million centipoise. Most of this company`s specialty products could be quickly prepared in a double planetary mixer. However, some of the newer formulations presented a particularly difficult mixing challenge. One such viscous epoxy adhesive required a two-step approach to assure a properly dispersed batch. The ingredients were first mixed in a 100-gallon double planetary mixer. Then the entire batch was transferred to a single-shaft high speed disperser that provided the extra shear needed for completion. This cumbersome, two-step process was highly labor-intensive. To improve production efficiency, this company installed two 100-gallon Ross PowerMix Hybrid Planetary Mixers to process its more difficult products. Batches that previously required at least an hour to prepare can now be completed in less than 20 minutes in a single mixer with less clean-uprequired.