Shorten your dissolution time by switching to a multi-agitator mixer. 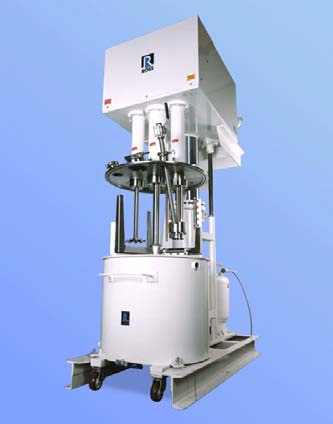 Dissolution processes can be optimized through the use of multi-agitator mixers which provide a combination of low-speed blending, high shear mixing, particle size reduction and superior heat transfer.

The cost of mixing

When done efficiently, mixing normally constitutes only a minor percentage of the total manufacturing cost. Inefficient mixing, on the other hand, can be an expensive operation that could hurt the bottom line. Lost value due to low yield, product contamination, corrections and reworks, prolonged cycle times and intensive clean-up should not be overlooked. On the balance sheets, these translate to increased use of raw materials and energy but more significantly, they lead to higher labor costs.

A number of mixing operations require the dissolution of one or more components into the liquid vehicle; typically before any other components can be added to complete the mixture. From dissolving simple salt powders to more challenging pieces of chopped rubber and everything in between, agitation is a main factor driving the rate of dissolution. In many chemistries, temperature is also a critical parameter.

Traditional methods of dissolving and mixing

Within the adhesives industry, for example, traditional equipment used to dissolve rubber into solvent was based on low-speed propellers or turbine-type agitators in vessels (known as churns). These devices, although effective, yielded long batch cycle times, some more than 24 hours.

Switching to higher speed single-shaft devices such as saw-tooth dispersers and rotor/stator mixers offered a great reduction in cycle time. The hydraulic and mechanical shear generated by these mixers break down the solute component into smaller pieces, exposing more surface area and allowing more solid particles to go into solution faster. However, maintaining a uniform temperature throughout the batch remained an issue in some applications. Single-shaft high-speed mixers did not optimize heat transfer between the jacketed vessel and the product, especially as the viscosity of the solution increased.

Multi-shaft mixers are composed of two or more independently-driven agitators working in tandem. A low-speed anchor complements one or two high-speed devices such as a saw-tooth disperser and/or a rotor/stator mixer. The addition of an anchor agitator allows the mixing system to process formulations that are several hundred thousand centipoise. The most common anchor designs have two or three wings. For added efficiency - especially in terms of axial flow - the anchor can be modified to feature helical flights in between adjacent wings.

The anchor promotes bulk flow within the vessel which prevents localized heating near the high-speed blades and also provides a means for agitating product near the vessel surfaces. Scrapers are commonly installed which significantly increases heat transfer efficiency. 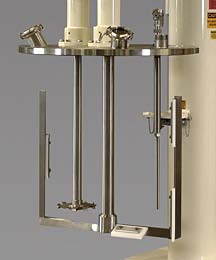 Dual-Shaft Mixer composed of a two-wing anchor with scrapers and a saw-tooth disperser. A temperature probe through the mixer cover is also shown. 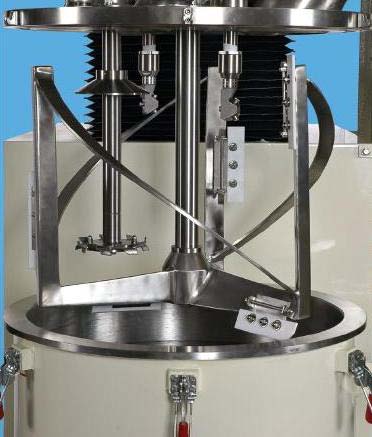 Dual-Shaft Mixer composed of a three-wing anchor with helical flights and scrapers, and a saw-tooth disperser with slinger. Two clean-in-place rotary spray nozzles are also shown. 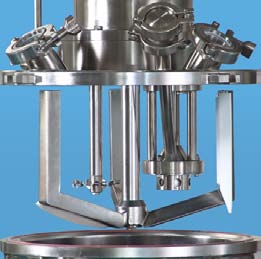 Triple-Shaft Mixer composed of a three-wing anchor with a toriconical bottom profile,a saw-tooth disperser and a rotor/stator with powder induction manifold. 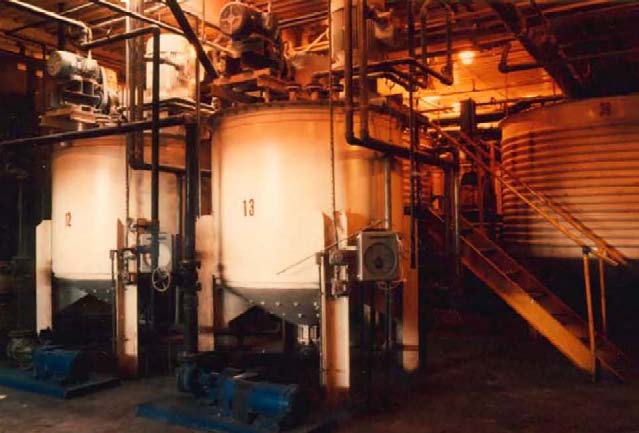 Above are two of the three 750-gallon Ross Multi-Shaft Mixers producing 230,000 lbs of adhesives per week at a tape manufacturing plant. The formulations use all synthetic or a mixture of synthetic and natural rubber, a solvent, tackifying resins and fillers.

The company was previously using turbine mixers for making their adhesives which are applied to paper, foil and other substrates. The single agitator would basically do the job but took much too long to complete the dissolution and mixing cycle. Eventually, the time factor became unacceptable in view of planned high-speed coating lines.By upgrading to the Multi-Shaft Mixers, they were able to reduce process timeby 50% without expanding their mixing room.