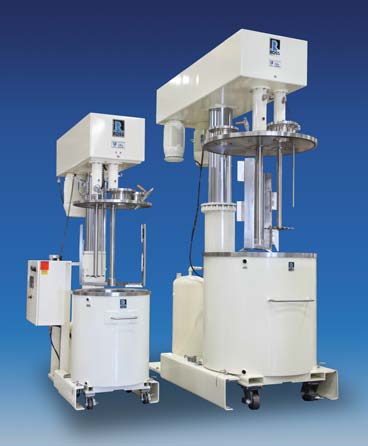 Multi-agitator systems equipped with independently controlled drives are highly efficient at producing good turnover and imparting shear to a viscous batch. In particular, the dual-shaft mixer is a versatile and cost-effective system used for processing a wide variety of viscous formulations.

Mixers operating with multiple agitators are exceptionally versatile in terms of viscosity range and mixing capabilities, i.e. powder wet-out, dispersion, dissolution, emulsification, particle size reduction, homogenization, heating/cooling, etc. This versatility mainly results from independently-controlled drives: the agitators can be engaged in any combination and at any speed for any interval during the mixing cycle. Although this sounds complex, multi-shaft mixers are actually engineered to be comparatively simple, effective and economical.

The dual-shaft mixer is the most cost-effective multi-agitator system. It typically features a high speed saw-tooth disperser blade that draws powders into the liquid batch through a strong vortex and breaks down agglomerates, effectively wetting the dry particles to produce a uniform, stable dispersion. Meanwhile, a low speed anchor supplies a steady exchange of materials from different parts of the vessel, essentially "feeding" the high speed disperser while constantly scraping the vessel sidewalls and bottom.

Running at tip speeds around 5,000 ft/min, the open-style saw-tooth disc blade creates vigorous flow within the mix vessel and imparts greater shear compared to other open-blade mixing devices such as propellers and turbines. On its own, the disperser blade produces acceptable flow patterns for products up to around 50,000 centipoise (cP). The addition of the anchor agitator extends this viscosity range to several hundred thousand centipoise.

Thus, the dual-shaft mixer is able to process thick pastes, viscous slurries, heavy suspensions and highly-filled formulations. Apparent static viscosity could be as high as a million centipoise or more but if the material is sufficiently shear-thinning, the robust disperser-anchor combination can produce adequate turnover during mixing and achieve a high level of dispersion. For example, a hair gel that is relatively non-flowable at rest but moves readily when agitated is a good application for a dual-shaft mixer.

Extremely viscous, dough-like formulations do however require a different mixing mechanism, such as planetary agitation wherein the blades move through all points in the batch instead of having a fixed axis of rotation.

Testing is recommended to confirm the best and most cost-effective mixing strategy for a specific high viscosity product. 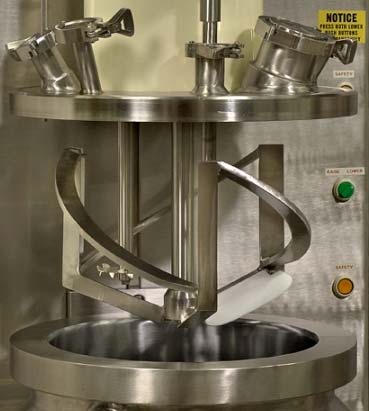 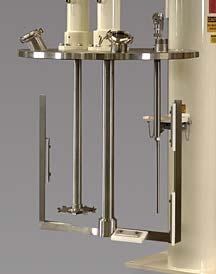 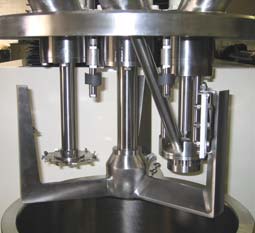 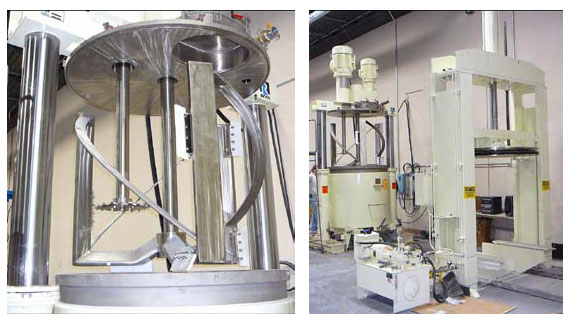 This Ross Dual-Shaft Mixer is used to prepare acrylic coatings, polyurethane sealants and other viscous formulations. The anchor features helical flights in between the wings which produce better top-to-bottom mixing. Vacuum is pulled during mixing to fully deaerate the mixture.

After the mix cycle, the vessel is rolled out of the mixer and moved under a heavy-duty platen-style discharge system. As the platen is lowered hydraulically into the vessel, a specially-fitted O-ring rides against the wall, literally wiping it clean. Product is forced out through a valve on the bottom of the vessel, or through the top of the platen. This improves the speed, efficiency and cleanliness of the discharge operation.