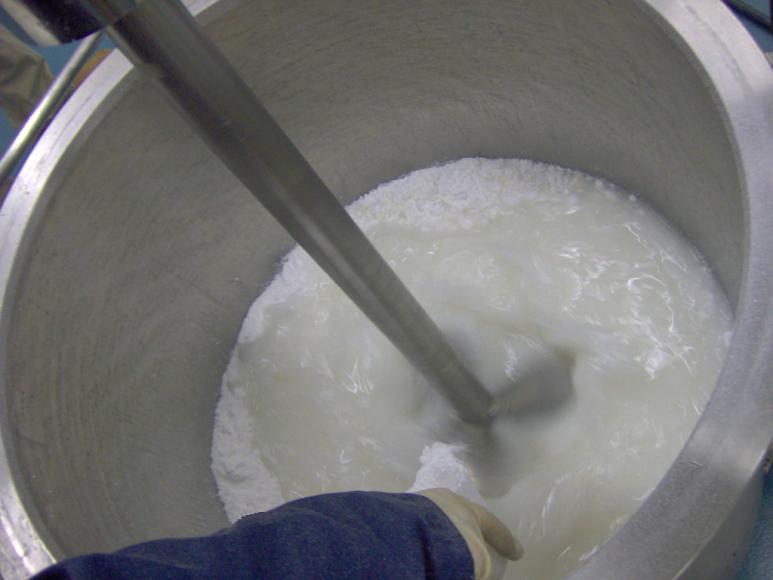 Consider high-speed sub-surface powder injection to eliminate floating powders and stubborn lumps in your mixing operation. Technologies such as the Ross Solids/Liquid Injection Manifold (SLIM) are highly efficient at maximizing yield as a result of faster and more complete solid dispersion.

One common issue encountered in solid-liquid mixing is the occurrence of floating powders on the surface of the batch. Solids float when the combine buoyancy and surface tension forces are greater than gravity. Thus, lightweight and difficult-to-wet powders such as alginates, carbomers, fumed silica, gums, starches and other thickeners are more prone to this phenomenon.

The inability to completely disperse solid particles throughout the batch within a practical amount of time can impact productivity, labor costs and power consumption. To combat this problem, tank baffles are used in conjunction with low-speed agitators such as propellers, pitched-blade turbines, impellers and anchor stirrers. Baffles help to promote turbulence when the liquid mass tends to rotate as a whole. Vigorous agitation leads to better contact between the solid and liquid phases but even when processed using high speed mixing devices like saw-tooth dispersers and rotor/stators, certain powders still take a long time to disperse completely, especially those that form lumps or "fish eyes" which are very difficult to break apart.

On a laboratory scale, small batches can be made using simple agitators because powders can be added at a very slow rate. In addition, blade size and agitator power are easily oversized in a bench-top setting.

By contrast, large-scale production of solid-liquid mixtures is not as easy to accomplish. Many operators are forced to carefully sift and/or slowly add powders in small increments. In extreme cases, solids are intentionally overdosed and any undispersed agglomerates are simply filtered out. This is done to keep cycle time within a reasonable period at the expense of higher raw material cost and waste generation. 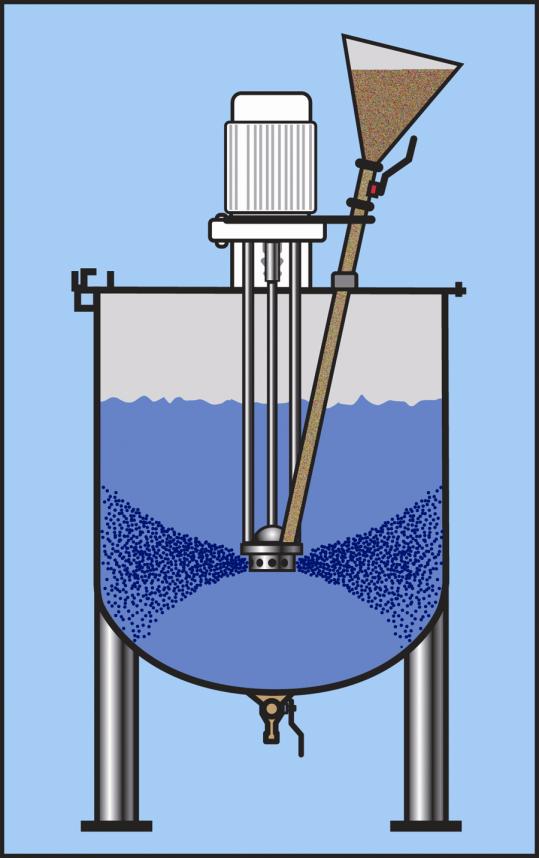 The Solids/Liquid Injection Manifold (SLIM) available on batch and inline Ross High Shear Mixers deliver solids below the surface of the liquid and right where vigorous mixing takes place, preventing them from floating. A ported rotor and stator specially designed to generate a powerful vacuum draws powders directly into the high shear zone of the mix chamber. Solids are instantly dispersed into the liquid, including materials that would normally resist wet-out. Because solids and liquids are combined and mixed at high speed simultaneously, the formation of lumps and fish eyes is greatly reduced, if not eliminated.

Operation of a SLIM system is simple and straightforward - just turn on the mixer and start inducting powders. A "hose & wand" device attached to the powder inlet of the SLIM allows the operator to simply draw lightweight powders straight from within the bulk container to prevent dusting. Powders may also be loaded into a hopper for even faster injection. And as soon as the mixer reaches operating speed, the SLIM valve is opened and solids are quickly drawn into the batch via the powerful vacuum generated by the ported rotor.

How the SLIM technology works 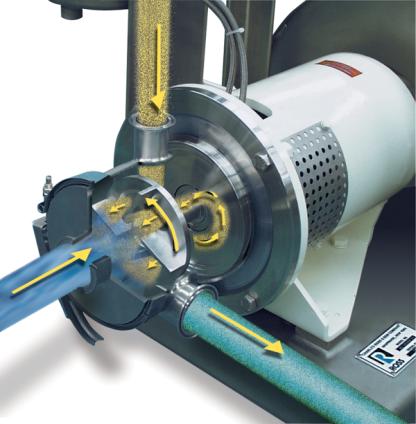 The above illustration shows how an inline SLIM mixer works. The liquid stream (1) enters the mixer and immediately encounters the powder addition. Drawn into the mixer by a powerful vacuum, the powder (2) is injected through the ported rotor directly into the high shear zone. The resulting dispersion (3) is expelled centrifugally through the stator openings at high velocity. 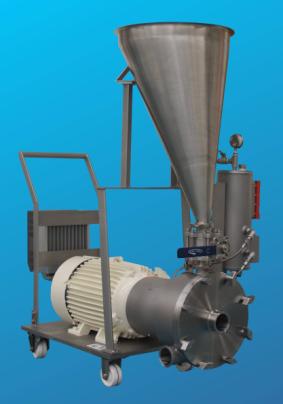 A coatings manufacturer was experiencing very long cycle times -- up to 6 hours of more -- in their 2000-gal stirred reactor. Operators had to very slowly add gum powders and other thickeners as the batch was vigorously agitated. Adding the gums too quickly caused them to ball up and form lumps which ruined the product. Next, a significant amount of talc powders was charged to the reactor and this material tended to float on the surface of the thickened solution. The batch had to be recirculated through an inline rotor/stator for hours to allow the talc powders to slowly fold into the mixture.

By replacing their rotor/stator with a Ross Inline SLIM Mixer, the manufacturer was able to introduce all solids sub-surface which eliminated the lumping and floating issues. The simple mixer upgrade drastically reduced cycle time by over 50%.