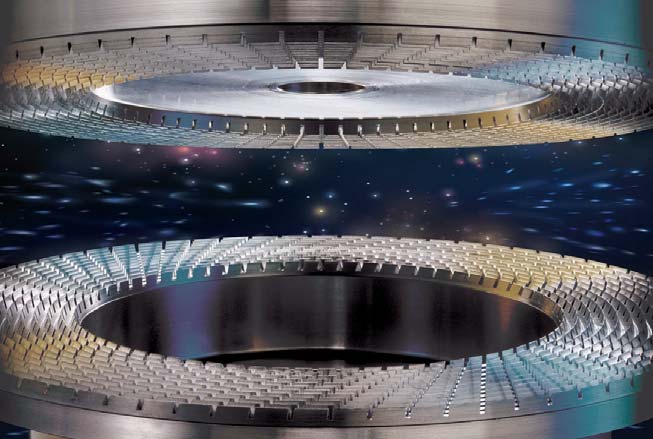 For many manufacturers, deagglomeration of solid particles suspended in liquid entails many hours of mixing and multiple passes through milling equipment. In other cases, it requires the use of very expensive but low throughput high pressure homogenizers. Typically a production bottleneck, cleaning and product changeover at this stage of the mixing process is often labor-intensive and time-consuming.

Across the process industries, there is indeed huge room for improvement in the preparation of very fine dispersions. In answer to this need, new rotor/stator mixer designs with unique geometries, multi-stage configurations and faster tip speeds have been developed in the last several years. In particular, Ross Ultra-High Shear Mixers are gaining popularity among manufacturers looking to update their traditional dispersion and deagglomeration processes. These new generation rotor/stators deliver more vigorous mixing, greater size reduction and higher throughput compared to conventional colloid mills, immersion mills and media mills.In certain applications, formulations that previously required high pressure homogenization can now be successfully produced in an Ultra-High ShearMixer.

The benefits of ultra-high shear mixing become even more pronounced in high volume production because typical flow rates through a Series 700 mixer are considerably higher compared to similarly sized colloid mills. At the same time, the inline UHSM is easier to clean and sanitize in place. Users experience shorter cleaning time, faster changeover and also the ability to run for longer intervals between cleaning cycles.

A comparably-sized inline UHSM costs considerably less than a high pressure homogenizer while being less sensitive to clogging and changes in viscosity. In addition, it can double duty as a transfer pump for moving low-viscosity finished product to downstream equipment.

The X-Series head consists of concentric rows of intermeshing teeth. Product enters at the center of the stator and moves outward through radial channels in the rotor/stator teeth. The combination of high tip speed and extremely close tolerances subjects the product to intense shear in every pass. The gap between adjacent surfaces of the rotor and stator is adjustable for fine-tuning shear levels and flow rates. The QuadSlot mixing head is a multi-stage rotor/stator with a fixed clearance. This generator produces higher pumping rates and requires higher horsepower compared to an X-Series rotor/stator set running at similar speeds. The MegaShear operates at the same tip speed as the X-Series and QuadSlot heads, but is even more aggressive in terms of shear and throughput levels. It consists of parallel semi-cylindrical grooves in the rotor and stator towards which product is forced by high velocity pumping vanes. Different streams are induced within the grooves and collide at high frequency before exiting the mix chamber. 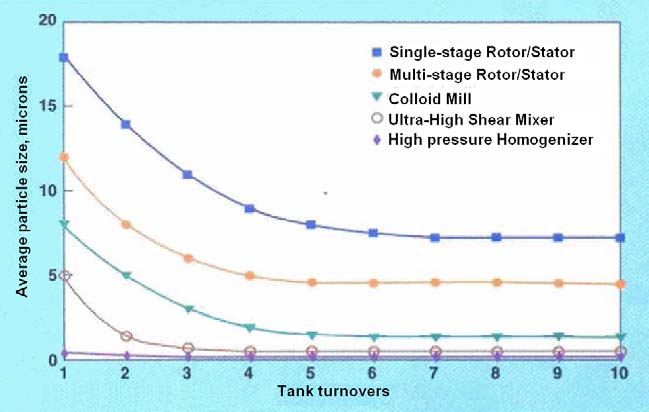 In this particular dispersion, the Ultra-High Shear Mixer outperforms the colloid mill and other rotor/stator designs. The average particle size achieved in the UHSM approaches that of a high pressure homogenizer.